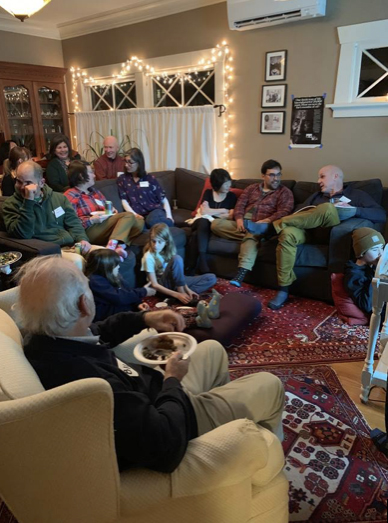 Last December 6, we hosted 35 folks in our home (see photo) to raise awareness around the impending drilling of the Arctic National Wildlife Refuge (ANWR). I first learned about ANWR, North America’s crown jewel, through Lenny Kohm, the “Arctic Warrior” who would become my dear friend & mentor. Lenny spent decades travelling the lower 48 States activating citizens to get engaged to protect this sacred place. You may know that ANWR’s existence is now severely threatened; oil leasing rights may be purchased imminently. But we, ordinary citizens, are taking action to stop it! Our collective actions can and must protect the Gwich’in’s sacred land and culture and the biological heart of the last great wilderness in North America. We hosted this first event (more to come!) with support from and gratitude for the Seattle Chapter Sierra Club, Full Circle Leadership Center, Finis Dunnaway (Lenny Kohm’s biographer), and Norma Kassi and other friends of the Gwich’in nation in Alaska & Canada.

The sales for leasing the land to drill oil has been postponed yet again, which is good. The White House has been extremely quiet [on this]. So the Arctic Day of Action is postponed until then. I will be in touch immediately via an emergency newsletter when action is required from all of us.  I am thankful for the folks who signed up to host Awareness Raisers in their homes. In the meantime, Goldman Sachs, JP Morgan, and just recently, Wells Fargo are now saying NO to financing drilling in the arctic due to pressure being put on them.